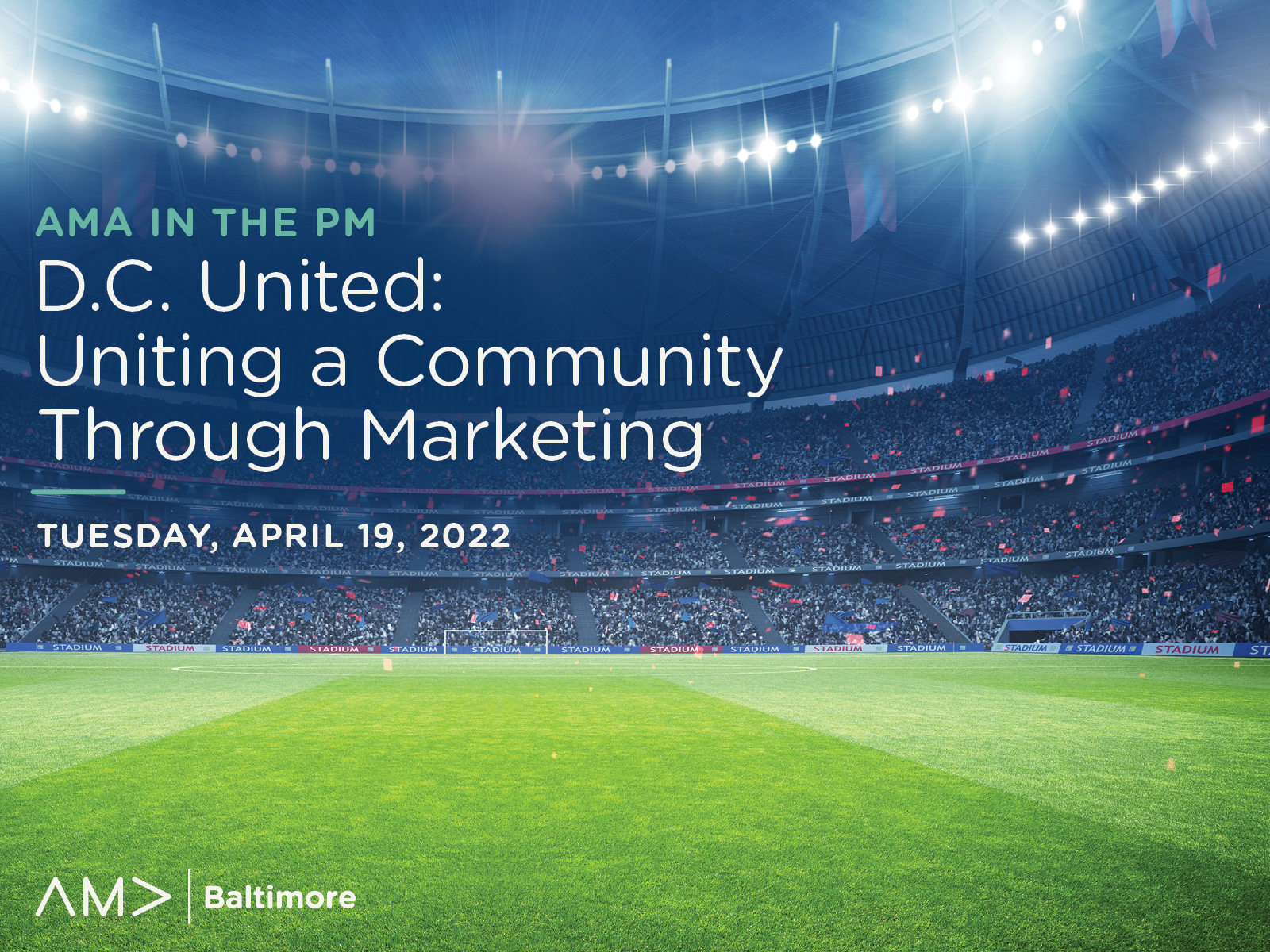 AMA in the PM: D.C. United: Uniting a Community Through Marketing
AMA Baltimore

Get an insiders’ look at how D.C. United is breaking the mold in professional sports marketing from becoming more strongly rooted in the Washington, D.C. community to modernizing its marketing approach to reach new audiences.

With a brand strongly rooted in the Washington D.C. community, the D.C. United marketing department was challenged with preserving its identity and loyal fanbase while modernizing its marketing approach to reach new audiences and make an impact through creative advertising and video campaigns.

In this AMA in the PM session, you’ll hear from Kevin Griffin, SVP of Marketing & Brand Strategy for D.C. United, as he shares how this MLS team is mixing things up with its marketing game to become more deeply connected to the D.C. community without losing its roots as a brand. You’ll hear Kevin’s personal account of the career journey that brought him to D.C. United and how his leadership is helping shape the team’s brand and marketing experience across channels.

Attendees will also get a peek behind the curtain of the recent video campaign that D.C. United launched with the help of Yes&. The session will cover tips on maximizing impact with a limited timeline and budget, and how to pursue a more modern approach to marketing and brand engagement without alienating loyal audiences.

Three random attendees will receive high-value giveaways. Winners must be present at the event in order to qualify.

Ticket sales will end two hours prior to the event’s start time. Non-members rate will increase 24 hours before the event.

Kevin Griffin is the Senior Vice President of Marketing & Brand Strategy for D.C. United. He was named to the position on September 27, 2021, by team president Danita Johnson. Kevin is a member of D.C. United’s executive management team and works closely with the club’s ownership group on various initiatives related to commercial endeavors and civic and community relations efforts. Griffin is tasked with stewarding D.C. United’s brand to increase the fan base and drive long-term brand health and commercial value across the enterprise.

Before joining D.C. United, Kevin was the President of Brand & Market Insights for The Adcom Group, which is the leading marketing and advertising agency in Northeast Ohio. As a member of Adcom’s executive leadership team, Kevin was responsible for a variety of functions and practices across the business including working with the agency’s top clients to position brands throughout the consumer landscape through marketing, public relations, social media, digital engagement, advertising, and sports marketing platforms.

Kevin served as Vice President of Marketing, Media & Fan Experience for the Cleveland Browns from 2013 to 2016 where he was responsible for the development of the club’s marketing strategies and executions across all marketing, advertising, broadcast, game-day production, and digital media. Before the Cleveland Browns, he led the Seattle Seahawks and Seattle Sounders FC Fan Development departments where he was responsible for game day entertainment, special events, brand management, and special assignments.

Kevin holds a degree in journalism from The Ohio State University and a master’s degree from Ohio University’s College of Business with a focus on sports administration. He was selected by the National Football League to participate in the Stanford University NFL Executive Management training program in 2005 and was recognized as the 2011 Major League Soccer Community Relations Executive of the Year.

Today, Mark is Chief Strategy Officer at Yes&, where he is responsible for spearheading distinctive and effective brand-centric strategic initiatives and creative advertising and marketing campaigns for clients. Prior to joining Yes&, Mark led small and large-scale global communications campaigns for FedEx, McDonald’s, Microsoft, Intel, Airlines for America, NOAA, SONY, Coca-Cola, Susan G. Komen For the Cure, Barclays, and Ford among many others.

As SVP and Senior Creative Director at Yes&, Josh spearheads the creative development of major projects for Yes& clients. A skilled writer, video producer, event director, and marketer, Josh leads the Yes& charge, opening new doors, exploring fresh ideas, all with an eye on the target: moving audiences to action. Prior to his current role, Josh served as Director of Accounts and Director of Creative Strategy, forging long-standing partnerships with Yes& clients.

Josh has an insatiable intellectual curiosity. He loves facts. He also has a passion for language. It’s no wonder that his meandering career path – actor, writer, director, professor, historian, sports marketer – has culminated in creative strategy. His creative work has served PBS, The Inn at Little Washington, Sierra Club, US Open Tennis, and Choice Hotels. Before joining Yes&, Josh directed creative for two MLB teams, the New York Mets and the Washington Nationals, where his legacy lives on in four larger-than-life racing presidents.

As a marketing industry leader, Josh ran creative workshops at ADWKDC, joined panels at ASAE Springtime and Personify, and has authored articles and blogs for Capitol Communicator and Meetingsnet. His insatiable curiosity led him to appear on Who Wants to Be a Millionaire. It did not end well.

AMA Baltimore Announces the Winners of the 2022 MX Awards

Visit our news page to stay on top of all things AMA!