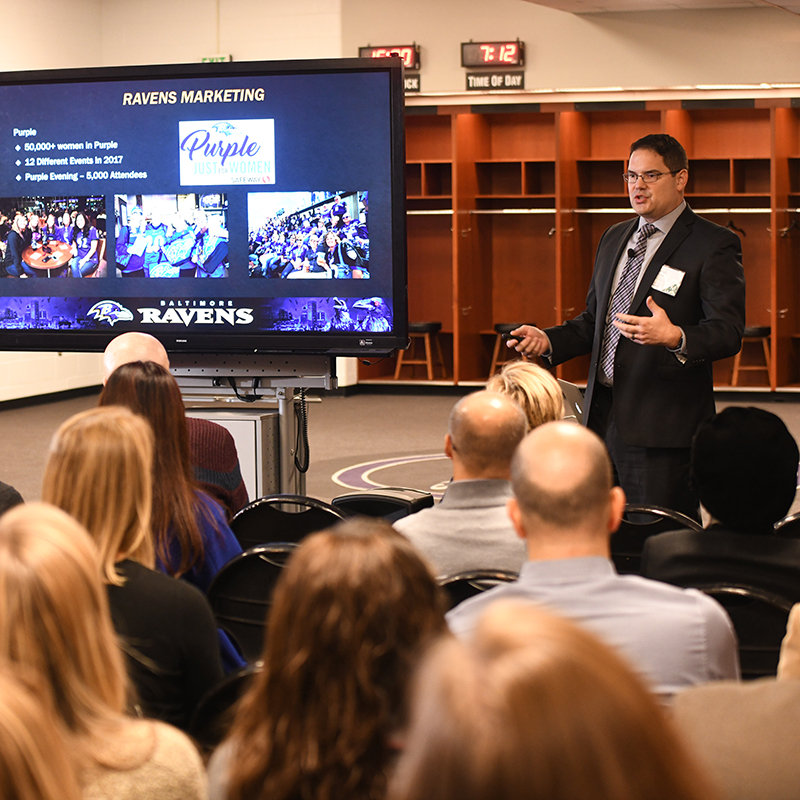 Bringing Fans to the Flock: The Ravens’ Strategy to Engage Fans and Energize Their Brand
AMA Baltimore

With the NFL being the most popular professional sport among all demographic segments and with 72% of people in Baltimore watching, listening, or attending Ravens games, the Baltimore Ravens enjoy enviable brand recognition. But retaining existing fans and acquiring new ones is a year-round challenge, explained Brad Downs, Vice President of Marketing for the Baltimore Ravens. At our AMA in the PM on November 15th, Downs addressed the challenges the marketing team faces and shared a few insights on how they engage with their audience.

The season may only last four months, but “we want to be top of mind for 12 months of the year,” Downs said. To that end, the Ravens provide multiple opportunities for fans to engage with the brand and team, both during and outside of the football season. With fans representing multiple life stages, the Ravens offer events and activities catering to each segment. Since the majority of people become NFL fans between the ages of 6 and 17, engaging the youth market, particularly those who play football, is a priority. Through its RISE football outreach program, the Ravens are able to engage youth football players and their families, through tournaments at M&T Bank Stadium, clinics with Ravens players and coaches, and tickets (with pre-game field passes) to Ravens home games.

However, not all fans join the flock in childhood; nearly a third become fans as adults, particularly women, who lead all football fan segments in wearing team apparel and buying licensed merchandise. The Purple Club, for the adult female fan segment, hosts 12-14 events per year. Their highlight event is Purple Evening, an annual event at the stadium that gives the 5,000+ attendees the opportunity to meet players and learn about the finer points of the game.

During the season, the focus is on the games. “Our goal is to have the best gameday experience in professional sports,” Downs emphasized. “It is essential to keep the stadium full.” The staff worked with the Disney Institute on how to improve the guest experience, revamping their game staff training, and enhancing pre-game and in-game entertainment. Recognizing the value of the PSL (permanent seat licenses) owners, the Ravens developed new ways to reward them, offering premium experiences such as watching pre-game warmups from the sidelines.

In 2017, Ravens events attracted 550,000 fans. But the biggest endeavor was the team’s September trip to London. Prior to the game against the Jacksonville Jaguars, Downs and his colleagues planned multiple opportunities to engage both international fans who had never before seen a Ravens game and local fans who had journeyed across the Atlantic. Accompanied by the team’s cheerleaders, marching band, mascot, and team legends including Ray Lewis, the goal was “to bring a bit of Baltimore to London,” said Downs. They achieved this through pub takeovers, flock parties, and a Purple Friday bus tour through the streets that brought out thousands of onlookers. The Ravens also gave away over 3,000 branded items to their newest group of fans.

After the difficult 2017 season that saw the Ravens miss the playoffs for the 3rd straight year and the fan backlash around the anthem demonstrations, the team’s marketing staff realized they were in danger of losing fans. The team embarked on a comprehensive brand analysis and positioning, affirming the team’s value to the lives of its fans and the City of Baltimore.

Downs and his colleagues recognized that while fans fall into distinct groups — the diehards and the casual fans — the key to reaching both segments was to leverage their emotional connection to the team and love of the game experience. This formed the basis of their messaging and allowed them to present a unified message while serving both audiences. They also recognized the need to improve the gameday experience with added entertainment and engagement and to promote the players’ involvement in the community. An additional component was the adoption of a CRM system to collect and evaluate fan data to improve segmentation and make engagement more effective.

After redefining the attributes of the brand, the marketing team worked to create new advertising collateral and, with the Ravens video crew, develop pre-game and in-game video entertainment that brought the traits and values of the team, the fans and Baltimore together for a powerful, unifying message. PSL owners were invited to submit their favorite game memories and stories of their fandom via the Ravens website, with their quotes and stories featured on the Ravens website, social media, and in-game entertainment.

While the 2018 marketing campaign is still ongoing, Downs reported that his team has received great feedback so far and that he and his colleagues are looking forward to continuing to evolve their brand marketing and fan engagement.

Thank you to the Ravens, Brad Downs, and his marketing team for a thoughtful and engaging presentation and for hosting AMA Baltimore in the Ravens Locker Room. To learn more about upcoming AMA Baltimore programs, visit our events page.