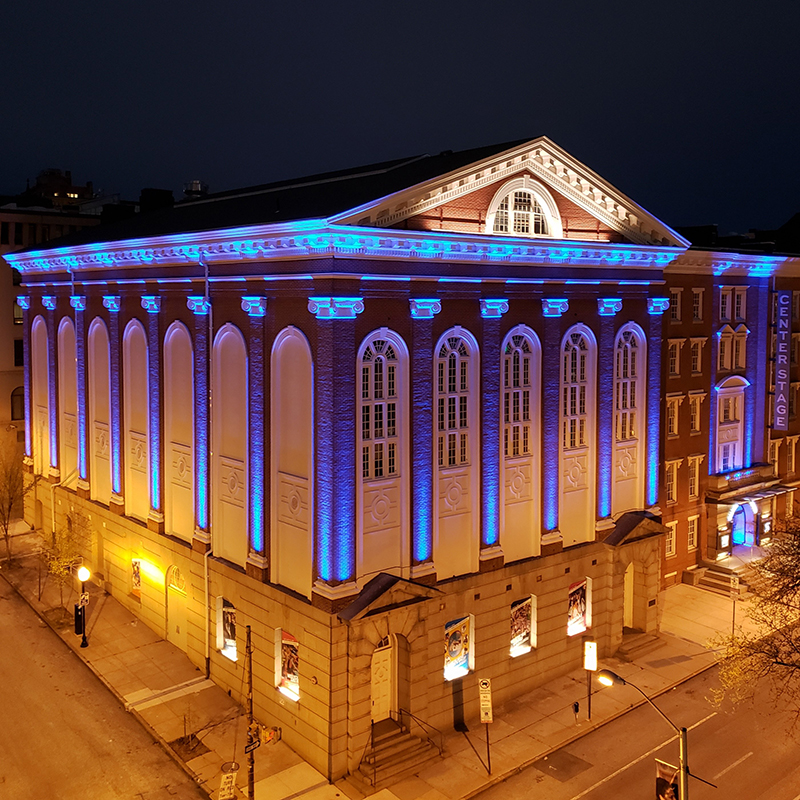 Many businesses had to make unexpected changes and adjust their strategies during the COVID-19 pandemic, but the theater industry was arguably one of the most greatly impacted by the stay at home orders and social distancing mandates that resulted. With Broadway canceling all its shows through 2021 and the uncertainty surrounding re-opening, live theaters had to shift to digital shows and other remote methods of entertaining their audiences, staying relevant, and keeping their businesses afloat.

Baltimore Center Stage was no exception. Launched in 1963, Center Stage has been a local fixture in providing quality theater and programming to over 100,000 people each season and is the designated State Theater of Maryland. The theater’s season typically runs from September to May when the bulk of its main stage productions, programs, and events take place – but then the pandemic hit. The theater was forced to shut its doors to the public and halt its live programming. Fortunately, the team at Center Stage was already armed with a plan of action to cope with the unprecedented situation.

Taylor Lamb, Communications Manager for Center Stage, said, “I think we were successful at adapting so much of what we do because we had already been doing so much engagement with our audiences online.” The live experience is the cornerstone of what Center Stage does, and the team had to be very innovative in bringing the same level of entertainment to its audiences.

Center Stage postponed all their shows as soon as the shut-down began, but one of the shows had a minimal set and most of the work has already been completed. The team decided to film and offer it as a virtual showing. “Where We Stand” was a play with a theme that centered on coming together as a community – a core focus of Center Stage and something that audiences could hold on to in a time of crisis, both of which helped drive the decision.

Center Stage put the filmed play on Vimeo and offered a link to people who bought tickets, allowing them to watch on-demand over a two-week period. Taylor noted that although the play relied on audience interaction for maximum effect, it was successfully translated to video and allowed broader reach, offering student matinees for their partner schools and gaining an audience of 1,000 students. The online format also enabled students to have a Q&A with the playwright to enhance the experience.

Although Center Stage did find some success in offering a digital version of a live performance, it is understandably difficult and not as effective in many cases. An article in the L.A. Times addresses the question of how theaters can connect to their audiences in the same way digitally. The article states, “It’s not about delivering products that can be passively enjoyed. People want to be brought into the process and engage not only with artists but also with their fellow audience members.”

Using tech creatively is a way to accomplish this in the interim, and that is what Center Stage did with some of its other programs over the past few months. According to Taylor, the team found success with using Instagram Live to bring spoken word performances in partnership with the Black Arts District. For its “Butterfly Sessions” of civic poetry, performance, and discussion, Facebook Live proved to be a great platform. It enabled the audience to chat and comment on the experience, and it was recorded, which resulted in broader reach.

“Play at Home” and Fundraising

Another fun and relevant way Center Stage engaged with its audience was through the “Play at Home” program, where they commission playwrights to write short plays designed for theater lovers to perform at home. Taylor said that this program kept playwrights in business while also offering audiences an outlet from the stress of confinement. She said, “The writers can be creative and do funky things because they don’t have to worry about translating to a real theater, and it encourages the audience to grab whoever they are quarantined with to put on their own show. Theater is a great way to get out of their comfort zone – anyone can put on a show.”

One of the most unique ways Center Stage has utilized technology was for its annual gala event. Taylor says that the event is a stand-out for the year and among the most creatively done events she has seen. With the forced move to a virtual event, Center Stage did its best to replicate the format they worked so hard to craft for their in-person event. They hosted a Zoom event with three different “adventure rooms”: A piano bar with requests from the audience, an interactive game room hosted by drag queen, Venus Fastrada, and drag king, Chris Jay, and a late-night variety show room with interviews and stand-up comedy. Taylor said that although it wasn’t an exact replacement for the in-person event, “we were able to be creative and offer attendees more than just streaming something.”

The COVID-19 crisis certainly changed plans and strategy for Center Stage, perhaps more so than many other types of organizations, but the team managed to pivot easily due to planning and preparation. Taylor said the group relies on principles they learned from the book Emergent Strategy by Adrienne Maree Brown, that emphasizes being generative, iterative, and ready to change. “As soon as the pandemic hit, we began coming up with a strategy to keep people at work and continue to serve our stakeholders,” she said. Pre-COVID, they were already having conversations about keeping theater alive, so they were well-equipped to adjust and stay relevant. The Center Stage team is focusing on planning ahead for its next season, which has just been announced, and is ready to bring great theater once again.

Learn more about creating virtual communities in our article, “Creating Virtual Communities: How Two Local Businesses are Managing the Challenges of the COVID-19 Shutdown.”