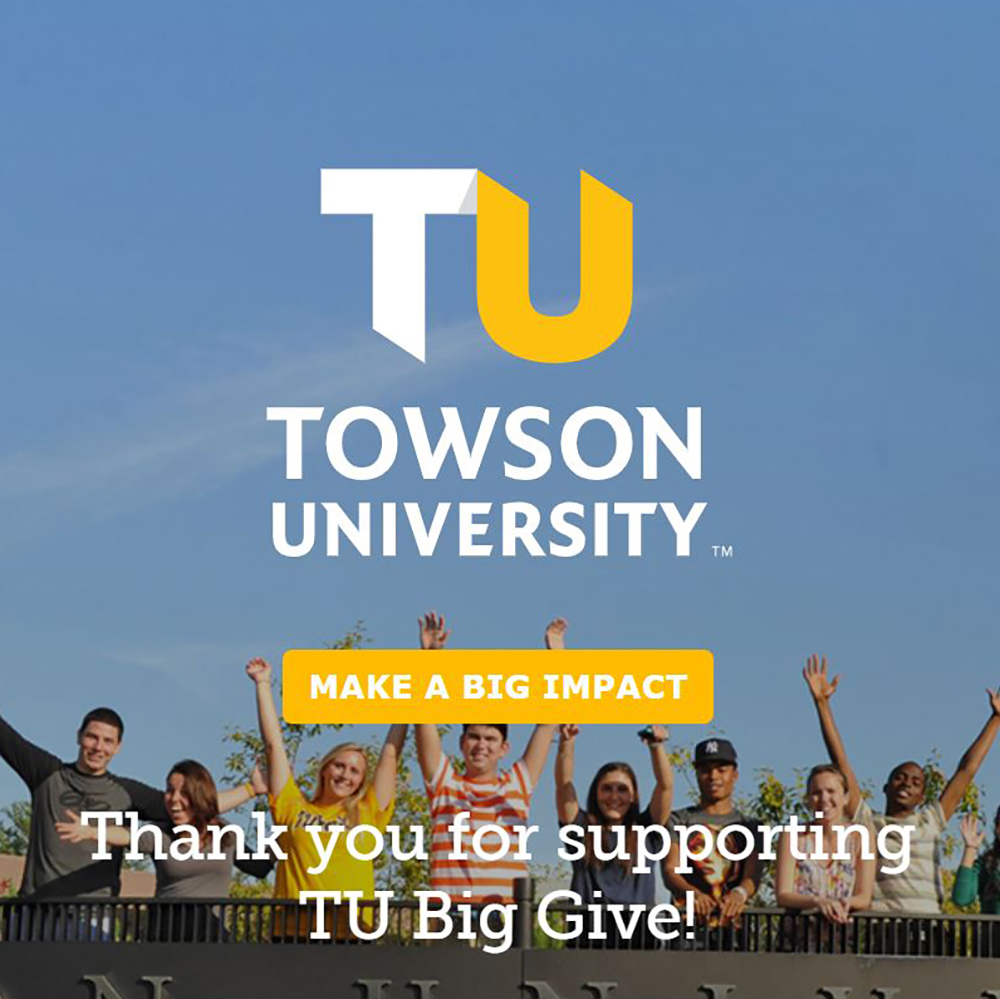 The Challenge and Opportunity of Virtual Fundraising: Towson University’s “Big Give”
AMA Baltimore

“When the pandemic hit, we knew that TU Big Give presented an opportunity to rally around our students and support them as a Tiger community at a time of need,” said Nkiruka McGinnis, Ph.D., director of the annual campaign at Towson University. Launched in 2019 as a weeklong spring event, the TU Big Give initially invited alumni, parents, faculty, and staff to support hundreds of different programs and funds. But this year, in the midst of COVID-19, fundraising leadership knew they not only had to make adjustments to their campaign strategy but also identify and meet critical need.

For this year’s campaign, it was decided that the event would last 24 hours, on April 22. “We agreed that directly addressing our students’ emergency needs was a priority, so we decided to shift from a week of giving to just 24 hours of giving and highlighted the urgency for immediate assistance,” McGinnis said. They centered the campaign on the Student Emergency and Food Insecurity Fund (created in 2015) and the newly-created Faculty and Staff Emergency Fund, with an option to contribute to the unrestricted fund, which supports the university in areas of greatest need.

The campaign pivot meant that the save-the-date postcard needed to be revised with a new date and updated content and design. While there was a bit of a delay in the mailing, the team reached out to their audience via email, text messages, social media and digital ads. They also introduced a text-to-give option and enabled giving through Google Pay and Apple Pay. On campaign day, they posted a counter on the campaign website that displayed updates on the number of donors and dollars raised as the day went on. Working in conjunction with the alumni relations office, they utilized a tool called Social Tiger to encourage alumni to be social media ambassadors for the campaign and promote the event on their own social media.

The strategy and tactics proved successful; nearly $150,000 was raised from over 1,300 donors, exceeding last year’s results in both donors and dollars. McGinnis believes much of the campaign’s success was due to its messaging. “We provided statistics to our audience and shared stories of the work that our students, faculty and staff are doing to support our community and one another during this difficult time. Most effective was the sense of urgency and the information we provided about how donors could help and how their support would benefit our students,” said McGinnis.

Another important ingredient in the campaign’s success was the partnership between the annual giving team and other divisions of the university. The team recruited campaign “champions” among the president’s cabinet, faculty, staff, and alumni, who helped promote the campaign and a culture of philanthropy. They also worked with the alumni relations office to develop and implement innovative ways of reaching alumni and with university marketing and communications to create the campaign logo, brand, messaging, and promotional video.

McGinnis hopes to continue to build on this year’s Big Give success. “As we plan for next year, we’ll again ensure that we have buy-in from our partners. We plan on emphasizing this is an ‘us’ project, and that we all play an important part in the success of the campaign.”

For more thoughts on how non-profits can make the most of virtual fundraising and manage the challenges of COVID-19, the Association of Fundraising Professionals has created a Resource Guide.