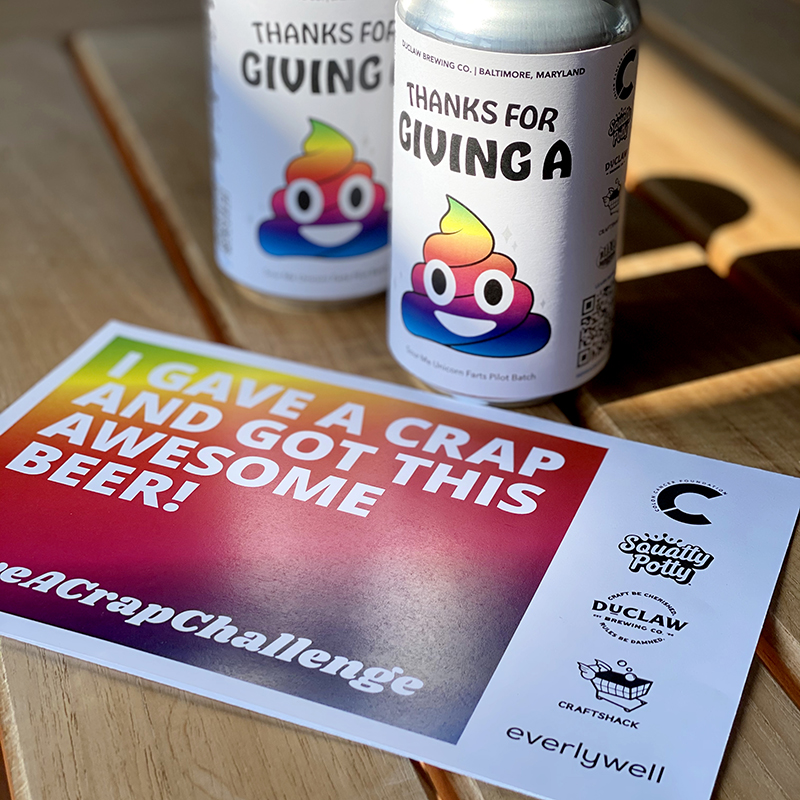 The “Give A Crap Challenge” Exemplifies Creativity, Co-Branding and Collaboration on an Awareness Campaign
AMA Baltimore

What do unicorns, beer, doughnuts, and bowel movements all have in common? That’s the question that Madeline Caldwell, formally the marketing director at DuClaw Brewing Company and now managing partner at 212 Communications, asked herself when brainstorming her next idea for a creative marketing campaign aimed at promoting DuClaw’s annual release of Sour Me Unicorn Farts beer, a limited-release brew made with fruity cereal and edible glitter and inspired by the original unicorn farts doughnut made by Diablo Doughnuts. In year two of the beer’s release, they recreated musical artist Lizzo’s iconic shot in a bathtub full of skittles by placing Diablo Doughnuts owner Michael Roslan in a bathtub full of fruity cereal in Baltimore’s Graffiti Alley. The campaign was widely covered, even landing on the cover of Food & Beverage magazine and winning the 2020 AMA MX Award for Campaign of the Year.

As Caldwell was planning the campaign for the third year of the brew, she had the idea to connect with Squatty Potty, drawing inspiration from its pooping unicorn campaign. When Squatty Potty’s creative director said yes, the teams began ideating, but had yet to develop their ‘big idea’ around a toilet stool and beer. During a presentation on her previous successful campaign at an AMA event, she tossed a Hail Mary and solicited ideas from the audience.

The next day, she was surprised to receive a phone call from an audience member, Corey Lane, senior account manager at Elevation Advertising. Lane had worked on a project with the Colon Cancer Foundation and recalls thinking, “Poop, beer, men that don’t want to get screened for cancer — I connected all the dots.” He came up with the idea of “trading poop for beer” as a way of promoting early detection of colon cancer, the second leading cause of cancer death among young men. “I thought I was going to get laughed off the phone,” Lane said. Instead, Caldwell and team were all in on Lane’s idea, and the “Give A Crap Challenge” was born: a contest that sent testing kits and beer to winners who agreed to test their stool sample.

The campaign was aimed at awareness and early detection. “We wanted to test as many people as possible,” Lane said. “There are so many misconceptions that colon cancer is an old persons’ disease and there was a desire to reach a younger audience that matched that of craft beer; it was a marketing challenge.” Not only that, but a logistical challenge as well. “We had to figure out what partners we needed to bring on board – many of whom were donating their time and talents –  in order to give out beer across the country: how to jump through legal hoops, manage lead times for getting the beer brewed, packaged, labeled and approved by the [regulatory body] TTB, not to mention collaborate on the marketing,” Caldwell said.

For the beer distribution, they brought on Craft Shack, an e-commerce alcohol delivery platform. Another challenge was managing the screening element, not wanting to manage health data and thinking, “How do we not get people to send ziplock bags to DuClaw,” Lane said with a chuckle. They brought on at-home testing company Everlywell, who generously donated all of the testing kits.

They also needed to come up with a clever campaign. Caldwell reached out to Squatty Potty because of the unicorn connection and because they already had the element of bathroom humor and a diverse following that included younger generations. “Known for viral videos, Squatty Potty’s creative director Carson Stilson filmed at DuClaw to create a campaign video and social content with the unicorn and the beer,” she said. Lane added, “The PR was great because it was a unique concept and there is a cult following for the beer.” The campaign targeted men between the ages of 21 and 45 who like beer. The team created a landing page to weed out anyone who was out of market and offered a free test kit, beer, and a Squatty Potty to 100 winners. An additional 300 participants could participate with an $80 donation and were encouraged to take the test or give the kit to a loved one.

The team relied on earned media, influencer outreach and radio spots to reach 42 media placements. In addition, Trey Mancini of the Orioles, who was recovering from colorectal cancer, shared the story, which was covered in MLB.com and exemplified the message that this disease can affect anyone. In addition, due to the pandemic, doctors’ visits were way down, which greatly impacted testing. “This created a sense of urgency around at-home testing because other options were not accessible,” Lane said. Another positive side-effect of the pandemic was that, according to Caldwell, “Many of the alcohol laws were relaxed during COVID. If we were doing this in 2019, it may have been more of a challenge or reach to have beer shipped to your house,” she said.

In the end, the campaign raised $21,923 to fight colon cancer on behalf of the Colon Cancer Foundation. It also helped the Foundation make progress toward their goal of donating 10,000 colorectal cancer screening kits to underserved populations this year. Perhaps the most special part of the campaign was the spirit of collaboration among all the different organizations. “It was never formal. We just thought this was an awesome idea and so many organizations were interested in working together without any formal contract. It was a really special group. People just said yes. There was so much trust among the partners, working together for the greater good,” Caldwell said.

Ultimately, the team achieved their goal of expanding testing. The campaign also created more demand for the Sour Me Unicorn Farts beer, which will be sold in select stores. Caldwell, Lane, and their teams are currently working to develop the next campaign for the Give a Crap beer, benefiting the Colon Cancer Foundation. Watch for it on the airwaves in March 2022.